Ancient Messene was the main city-state of Messinia region in antiquity. The city is located on Mount Ithomi, 25km from the city of Kalamata, near the modern village Mavromati. The city was founded in 369B.C. by General Epameinondas from Thebes, in order to control Sparta’s expansion in Peloponnese.

Today the archaeological site includes the city’s centre with various administrative and religious buildings, such as the Theater, the Asklepieion complex and the Stadium area. Few roman villas located in the centre are also excavated and visible, offering visitors a complete view of the public and private space of the ancient city. A few km outside the archaeological site the Arcadian gate is well preserved and can be visited, as well as the archaeological Museum which includes findings of the excavations.

In the nearby village a café-restaurant is situated, with a marvelous view to the archaeological site. 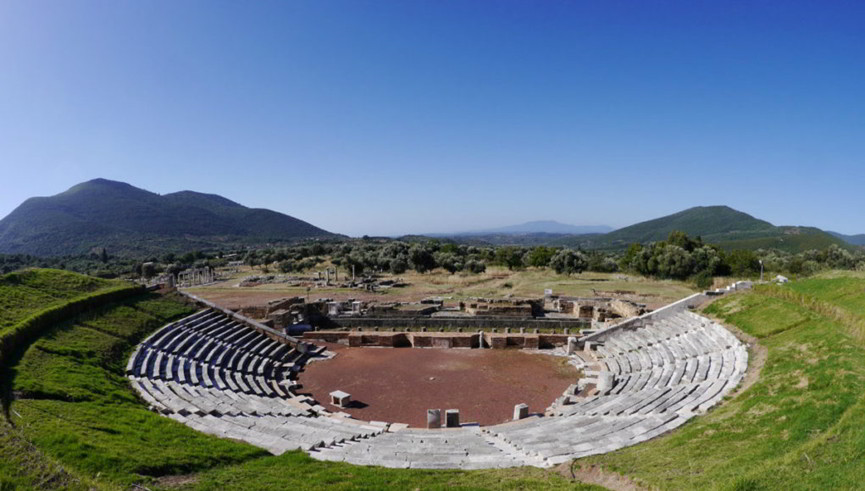 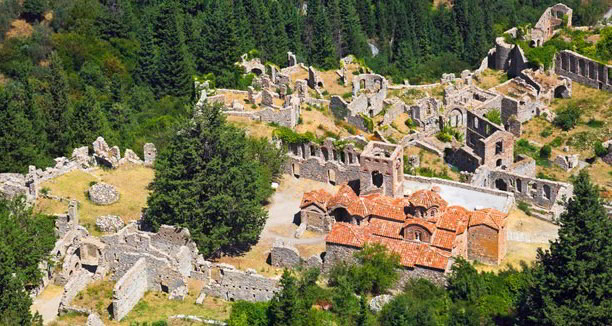 Mystras is a late Byzantine fortified city located on a hill in the foregrounds of Mount Taygetos, near the city of Sparta. In 1249 a fortress was built by the prince of Achaia, William of Villehardouin in order to control the Southeast Peloponnese, but after Byzantines reconquered the area, the town developed down the hillside. The city of Mystras became the centre of Byzantine power in southern Greece until the Ottoman-Turks conquest in 1460.

Numerous religious buildings,private churches and monasteries, of great architectural importance with influences from Constantinople, the “helladic” school and western features,are restored revealing the magnificent frescoes and the mosaics.  Also private houses and the palace complex are still visible, as well as constructions related to the city’s water supply and drainage. A walk around the city offers the impression of traveling back in time to the medieval era.

The Monastery of Pantanassa, still operating, the church of Aghios Demetrios, where a small museum is located with amazing findings, such as a lady’s burial, and the Peribleptos Monastery are few of the most important buildings showing the glory of Late Byzantine times.

Mystras is enlisted as a UNESCO World Heritage Site.

Mycenae was the main centre of the Mycenaean world and gave its name to a period and a civilization that evolved throughout the entire Greek World between the16th and 12th century B.C. and spread to all known sites in the Mediterranean basin. At its peak in 1350 BC, the citadel and lower town had a population of 30,000 and an area of 32 hectares.

Mycenae was founded between two tall conical hills, Profitis Ilias (805 m.) and Sara (660 m.), on a low plateau dominating the Argive plain and controlling both the land and sea routes.The archaeological site of Mycenae comprises the fortified acropolis and surrounding funerary and habitation sites, which are located mainly to its west and southwest. Most of the monuments visible today were erected in the Late Bronze Age, between 1350 and 1200 BC, when the site was at its peak.

Great Cyclopean walls surround the almost triangular acropolis, which is accessed from the northwest through the famous Lion Gate, the symbol of the Mycenaean rulers’ power. Two Grave Circles, A and B, are visible inside and outside the walls respectively and various imposing tholos tombs are surrounding the area. Inside the fortification numerous administrative and religious buildings can be visited, as the palace at the top of the hill and the religious centre, as well as residencies and workshops.

The first to conduct extensive excavations insitu, forced by the omeric poems that had helped him some years before with the discover of Troia,  was Heinrich Schliemann who visited the site in 1874 and made the most important discoveries in 1876 by uncovering the Circle Grave A, royal tomb. From then on many important excavations followed until today and the site is enlisted as a UNESCO World Heritage Site.

A museum nearby the site includes numerous important findings of the excavations. 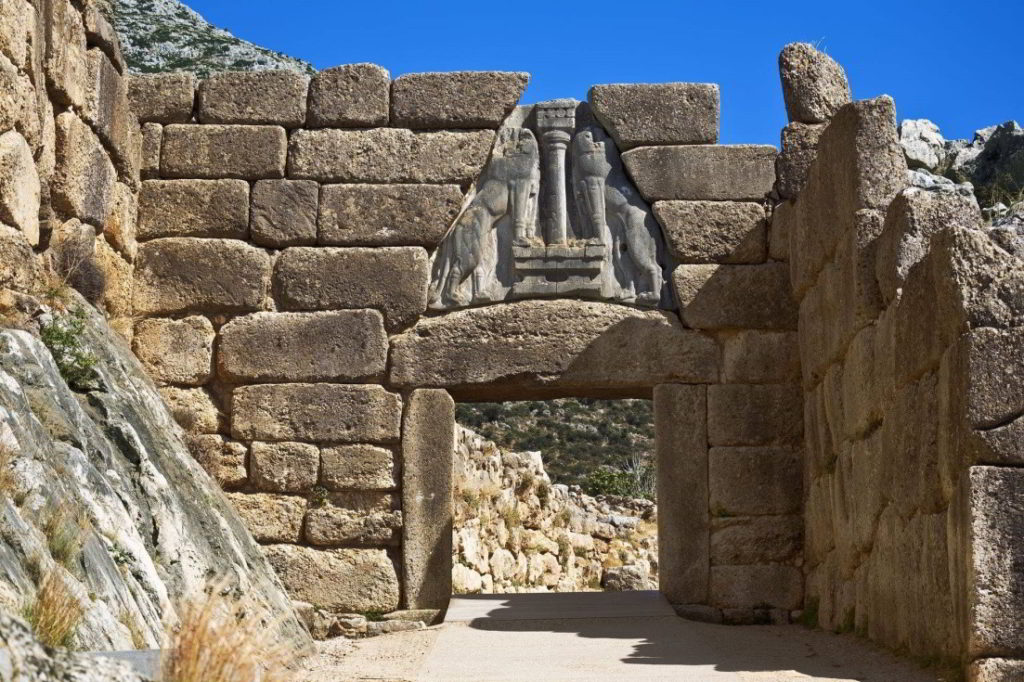 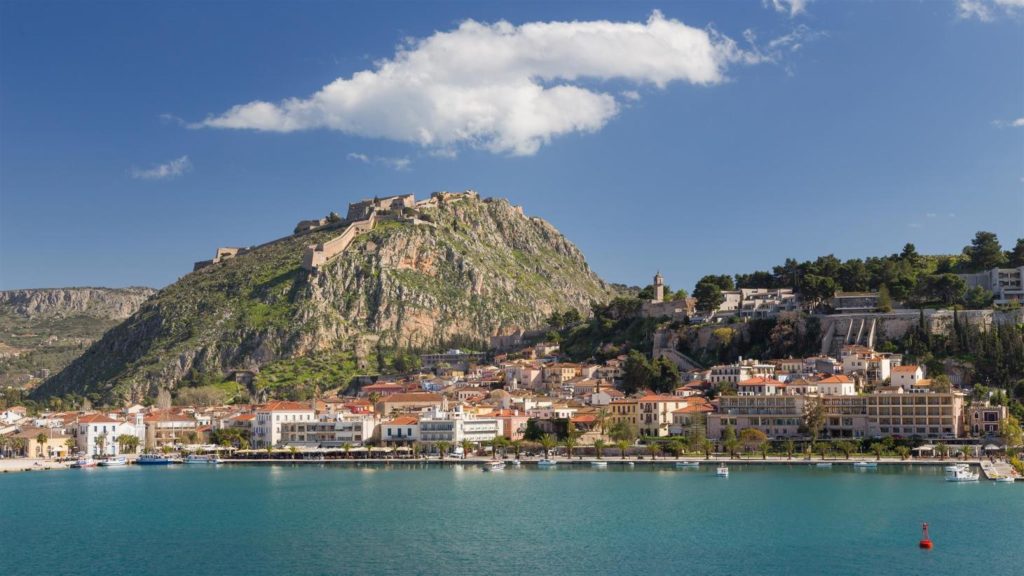 The city of Nafplion was an important seaport during Middle ages and the capital of the First Hellenic Republic after the Greek War of Independence.Due to its strategical position located in the Argolic Gulf, various conquests from Franks, Venetians, Ottomans and Greeks have created its architectural style, still visible today. Fortified settlements, castles, as well as numerous neoclassical buildings, small alleys and stepped streets, create a romantic atmosphere.

Syndagma Square, the most important and historic square in Nafplion, comprises the centre of the city. Many important historic buildings surrounding the square, such as the Venetian navy’s depository, which today houses the Archaeological Museum, the parliament, former mosque of Aga-Pasha and others.

Also a visit to Palamidi fortress well preserved until today and with an important role during the Greek War of Independence offers a great view through the whole area and can be reached either by car or on foot, if someone is willing to walk up its 999 steps.

As Nafplio is also known for its Chaplet industry, one has the opportunity to visit the unique Chaplet Museum and also buy a chaplet from the various shops around the city.

In the peaceful hinterland of Epidaurus, with its mild climate and abundant mineral springs, is the sanctuary of the god-physician Asklepios, the most famous healing centre of the Greek and Roman world. The sanctuary belonged to the small coastal town of Epidaurus, but its fame and recognition quickly spread beyond the limits of the Argolid.

The Asklepieion at Epidaurus comprises two sanctuaries dedicated to two healing gods: the earlier sanctuary of Apollo Maleatas on Mt. Kynortion and the later sanctuary of Asklepios in the plain, where the famous healing rituals took place.

The sanctuary in the plain is the largest and through its monumental buildings offers the opportunity to investigate the healing rituals and its importance during the ancient times.Apart from the baths, a palaestra, a gymnasium, an odeon and a stadium, the most imposing building is the Theatre, a perfect example, remarkably adapted to the landscape, beautifully proportioned and with perfect acoustics.

Still today various performances take place in the summertime during the Epidaurus festival. 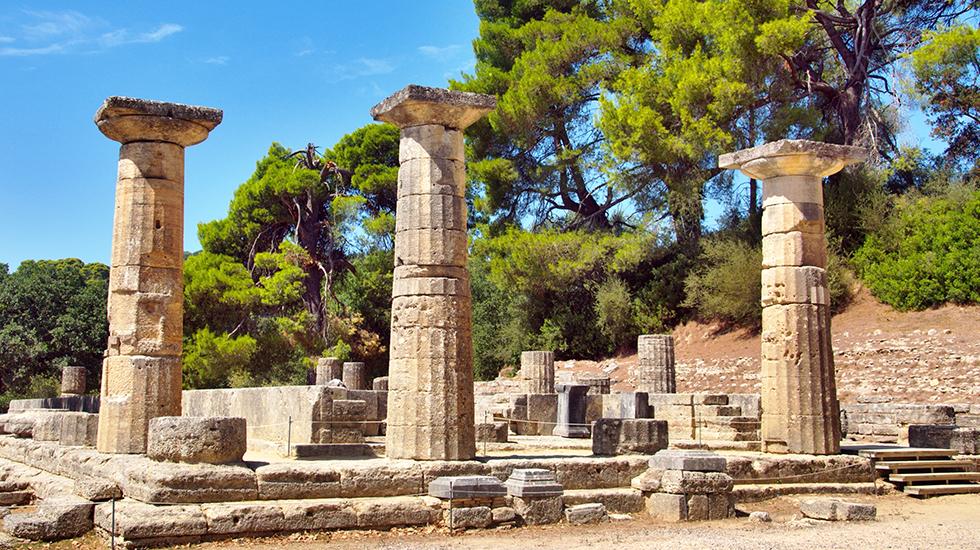 The Sanctuary of Ancient Olympia is located in western Peloponnese, in the beautiful valley of the Alpheios river.Dedicated to Zeusbecame the most important religious and athletic centre in Greece. The Olympic Games, the greatest national festival and a highly prestigious one world-wide, was held every four years to honour Zeus.The Altis, the sacred enclosure including various trees, was first formed during the tenth and ninth centuries BC, when the cult of Zeus was probably established. The constitution of the games dates back in time before 776 BC, when the games were reorganized and the sacred ekecheiria (truce) wasinstituted. Also at that time the first monumental buildings were constructed – the temple of Hera, the Prytaneion, the Bouleuterion, the treasuries and the first stadium. The sanctuary continued to flourish into the Classical period, when the enormous temple of Zeus was erected and the stadium moved to the east outside the Altis.The temple of Zeus with columns of 10.43 metres high, hosted the chryselephantine statue of Zeus, one of the Seven Wonders of the ancient world, created by Pheidias c. 430 BC.

Nearby the archaeological museum includes a large collection of bronze votives and a highly artistic statues collection.

Ancient Olympia is enlisted as a UNESCO World Heritage Site.

The fortress of Niokastro located at the top hill of the city of Pylos, was built by the Ottoman Turks in 1573, after their defeat at the Battle of Nafpaktos, to protect the southern entrance to the Navarino Gulf and to control the trade route from the East to the West and vice versa. After various occupations from Venetians, Greeks and Turks finally passed under Greek control after the Battle of Navarinoin October 1827. After 1830 the castle was abandoned and the site of the acropolis turned into prisons. The acropolis was also fortified with bastions and ramparts for numerous cannons.

Today inside the castle ruins of houses and public buildings are still visible. Two of them have been restored and are hosting the archaeological museum of Pylos, with a variety of important findings of several excavations and a collection of maritime-underwater archaeological findings. Also an imposing mosque, which with the liberation was converted into the Orthodox Church of the Transfiguration has been restored and can be visited. 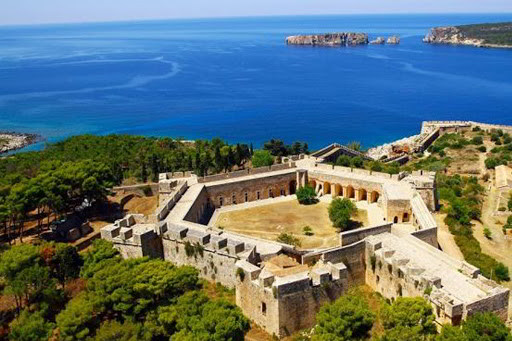 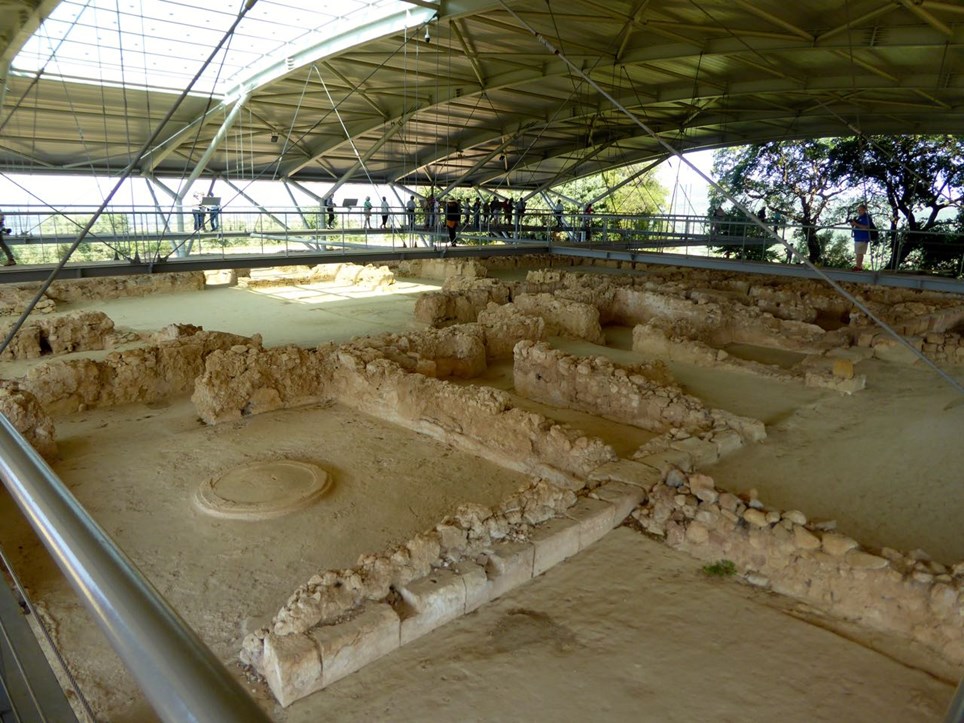 The Palace of Nestor is located on the hill of Epano Englianos, close to the modern town of Chora, 17 km north of Pylos.

The palace reached the peak of its prosperity in 13th century B.C. The early years of the 12th century B.C. the palace was destroyed by fire. Is the best preserved of the Mycenaean palaces. It’s a complex of various buildings consisting of 105 ground floor apartments. The most important compartments of the palace are the big rectangular “throne room” with its circular hearth, the room with the clay bath tube and the stores with their numerous storage vessels. The walls of the palace were decorated with fine wall paintings.

The thousands of clay tablets in Linear B’ script found in the “Archive” illuminate the multiple functions and transactions which took place there. These texts proof that Linear B’ is the earliest known Greek script, which was deciphered by Michael Ventris.

Adjacent to the palace complex a tholos tomb was also unearthed and in the later years continuous excavation by University of Cincinnati have revealed more burial structures, such as The Griffin Warrior Tomb rich in findings.

The Archaeological Museum including a variety of findings and an important Linear B’ scripts collection is situated in the town of Chora.

The caves at Pyrgos Dirou, just south of Areopolis in the region of Mani are perhaps one of the most important natural sites in Greece. There are two caves in the area, Vlychada and Alepotripa. The existence of the Vlichada cave has been known to the locals since about 1900. In 1949, the Hellenic Speleological Society, began a systematically exploration of the cave and in 1967 was open to the public.

The cave began to form hundreds of thousands of years ago. The stalactites and stalagmites, which are currently under water, were formed when the sea level was below its current level. Stalactites have been found at a depth of 71 meters. The maximum depth of the cave has been located off the tourist route and reaches 80 meters.

Inside the cave fossil bones of panther, hyena, lion, deer, ferret and the largest hippopotamus bone deposit in Europe has been unearthed and near its natural entrance, excavated pottery sherds indicate human presence.

The tourist route has a total length of 1,500 meters and takes about 25 minutes to complete. 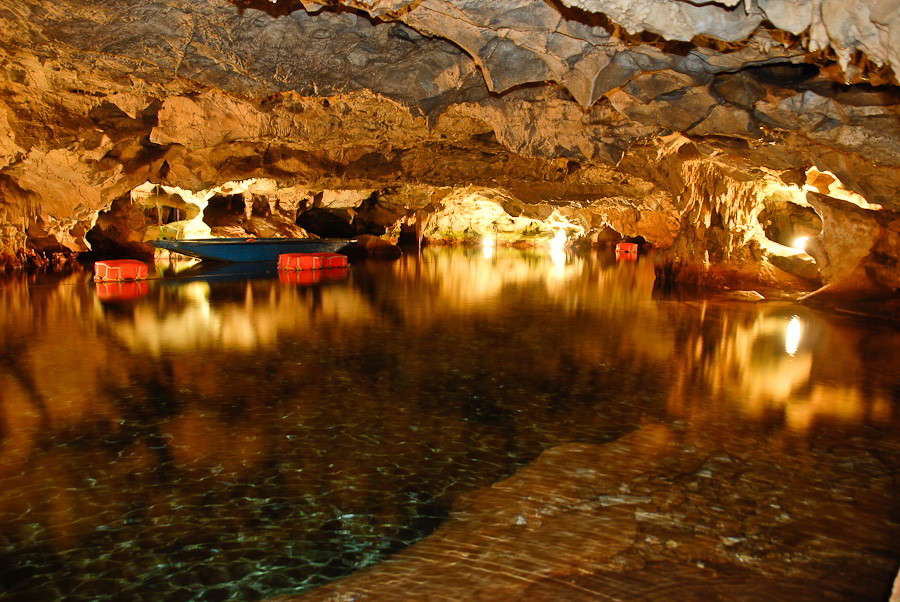 Made with ❤ by Ine